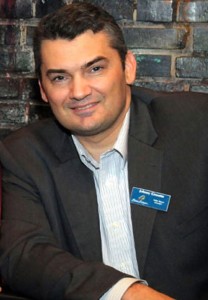 Johnny Grooms hails from Newport, Tennessee in the foothills of the Great Smoky Mountains. After high school, with his eyes on a law career, he attended East Tennessee State University, majoring in criminal justice and political science.

On his way to enrollment at the University of Memphis School of Law, Johnny drove through nearby Tunica, Mississippi. He was intrigued by the development of new casinos in Tunica and thought they could offer him a good part-time job while in college. Johnny began his gaming career as a break-in dealer at $1-5 seven-card stud and has never looked back. Demonstrating a natural talent for managing the game, he was soon hired at the Tunica Horseshoe to deal their higher-limit tables.

In 2000, the Horseshoe and Gold Strike Casinos partnered to host the Jack Binion World Poker Open. Johnny was chosen to deal the final tables where he got his first taste of world-class tournament poker. Dealing these championship final tables left an indelible impression on Johnny as he recognized the importance of wise and consistent rulings at this level of play.

Johnny advanced to Tournament Director at the Horseshoe in 2003 under the guidance of industry legends Jimmy Sommerfeld and Ken Lambert, Jr. He eventually became Sommerfeld’s assistant TD, managing the WPT World Poker Challenge in Reno, Nevada. In 2005 Johnny contracted with Harrah’s as Tournament Director of the WSOP Circuit Series and later served as TD for the 2005 World Series of Poker in Las Vegas.

In 2006 he joined MGM Resorts International, directing tournaments in Tunica and Biloxi including the 2007 and 2008 WPT World Poker Open, and the 2007 WPT Gulf Coast Poker Championship at Beau Rivage. Johnny soon became Poker Room Manager at Beau Rivage in addition to managing regional tournaments there and at the Gold Strike Tunica.

His outlook about the game is straightforward: “I want players to have a great experience. Most players just want a fair shot to win and they see poker as both a challenge and entertainment. I want to give them the best product possible. If we take care of the customer, the poker community will grow and thrive. If the game isn’t fun, new players won’t stay with it”. Johnny says that just when he thinks he’s seen it all, a new situation presents itself and he’s learned to be flexible. His least favorite reason for a rule is: “that’s the way we’ve always done it”.

This simple philosophy must work because Grooms is one of the most respected and popular TD’s in the industry. “Johnny understands what players want and he knows how to be fair, firm, and consistent. His intuition to make tough decisions is as good as anyone in the business” says fellow TDA Board Member Jack Effel.

Johnny and his beautiful wife Rebecca married in 2005 between tournament stops in Atlantic City and San Diego. They both love cooking and share their home with Lucy, a 160-pound English Mastiff, and Sally, A 12-pound Jack Russell Terrier. In his spare time he enjoys reading, playing golf, and of course playing poker. Johnny holds a Bachelor’s Degree in Business Administration from the University of Phoenix and plans on earning a Master’s of Business degree in the next few years.